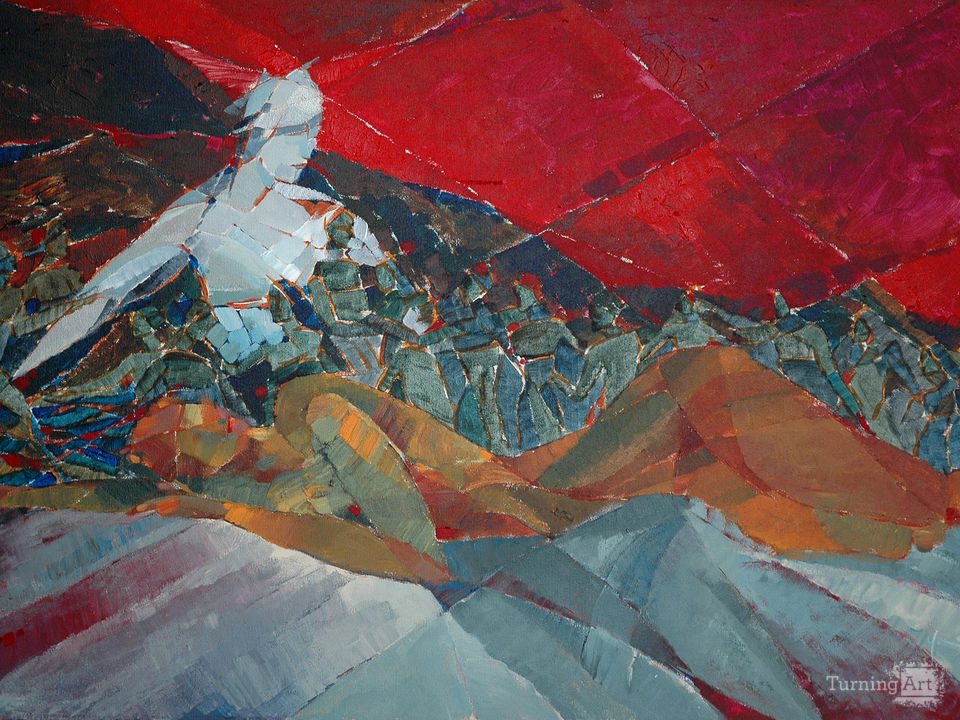 Despite worldly barriers the true lovers who could not meet have adoration for each other.

I choose unique inhabitants for my worlds. Rocks assume human forms and indulge in various casual activities. I try to capture an aesthetic pleasure in mountains, cliffs and valleys and human behavior in flowing, transparent colors.

Other works by Yogendra Sethi

Belonging to a well-reputed business family of Indore, nestled in the fertile lands of Malwas in Central India, Yogendra had the making of an impressionist in his early days. Flair for Art was handed over in legacy. Playing a connoisseur was more of a tradition than a virtue. His academic career is a unique amalgam of arts and commerce. His endeavors in field of Fine Arts earned him a degree of MFA from the Indore School of Fine Arts, whose portals have seen the like of M.F.Hussain. Keen to add a shade of contemporary west to his occidental self, Yogendra took another leap by graduating as an MBA from Berkeley, California, in 1975.

Yogendra in his early years, painted the rustic countryside of India. Later he was overwhelmed with the unsurpassed beauty of Berkeley Hills, and captured the natural wonders of California in series of many outdoor landscapes in transparent watercolors. Viewers were astounded by the physical impression of his innate vision, during his one-man show of Acrylic paintings in 1997 at Vanden Berge Gallery, San Francisco USA. Taj Art Gallery, Bombay, Somar Art Gallery in San Francisco, are some of the other melting pots of art where YS has contributed with his water color Landscape and Impressionistic contemporary Acrylic canvas. His paintings, a tyro’s dream, decors the walls of many collectors internationally.

The colors of nature transformed into Yogendra’s eyes, gave him an unbelievable vision to understand and enjoy the beauty of colors in Gemstones while starting his business career in 1976. When asked to deliver form and substance to his vision, Yogendra sitting on motley of colors responds, “No one color is good or bad or liked or disliked. Life is a rainbow, the more color you infuse the more you enjoy it. What is imperative is how every subsequent effort transcends the other.”

Yogendra seems to assuage the hardness of diamonds with his subtle exploits on the canvas, depicting the exhibits of nature. His expertise with gems allowed him to master unusual prismatic forms. He has innovated elongated female forms with spectrum of colors to reflect the most precious gems on earth. All along YS has been an avid evangelist of the evolution of artistic expression.