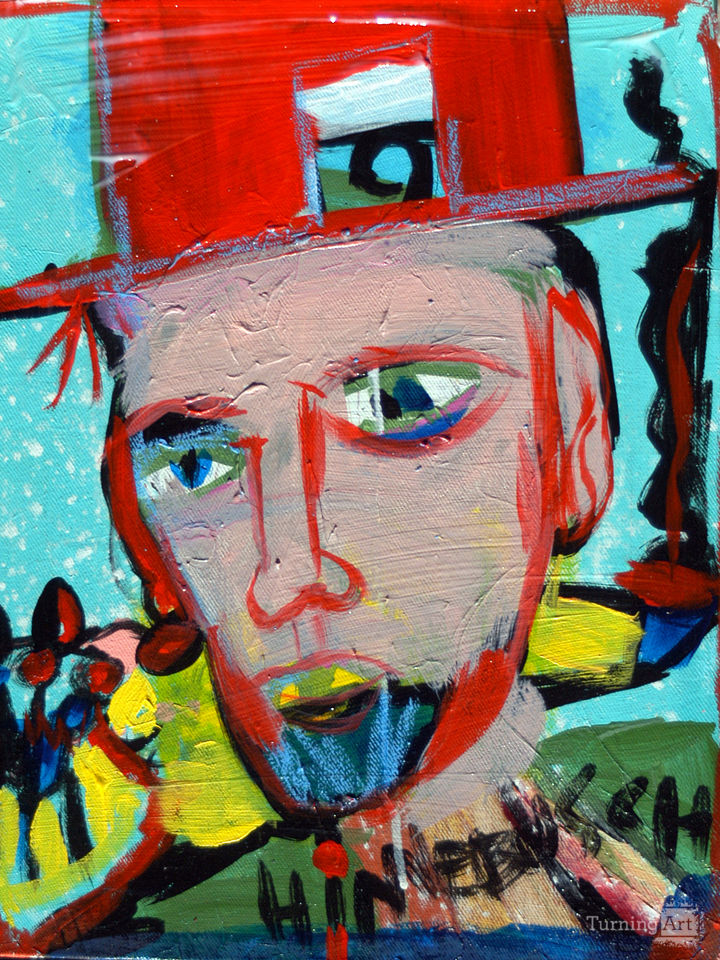 A colorful remembrance of Honest Abe

For California Neo-expressionist painter David Hinnebusch, artistic exploration has evolved over his 48 years mostly as a solo endeavor. Although he says he has been blessed with amazing friends and supporters throughout his life, he will be the first to tell you that he’s always felt like an outsider.

As a burgeoning African linguistics scholar, Hinnebusch’s father moved his wife and three children, of which David is the eldest, from Pittsburgh to Tanzania, back to Pittsburgh, then Kenya, and finally accepted a professorship at UCLA. Hinnebusch recalls growing up in Africa with mixed emotions. “I was one of the only white kids, and European kids were picked on. It was always ‘Yank’ this, and ‘Yank’ that.” However, traveling back and forth between the United States and Africa during the political tumult of the late ’60s did serve to develop David’s worldly and inquisitive nature at a very green age. He remembers a question he posed to his father at Uganda’s Entebbe International Airport. “I was about 4, and while we were waiting to get on a plane, I went to my father and asked ‘Dad, who’s crazier, Idi Amin or Richard Nixon?’ I think he was stunned.”

As an outlet between the ages of 5 and 11, young David wrote and illustrated his own stories, creating a collection of books filled with the kind of words and imagery that make child psychologists salivate — particularly one storybook written in Nairobi, the title of which reads as a testament to the teasings of his youth: The War Boys of U.S.A.

This brand of heavy introspection followed Hinnebusch through his teenage years as a student at West L.A.’s University High, and manifested in depression, eventually leading to heavy drug use. Bad drugs. The kind of drugs that his professor father and microbiologist mother would not tolerate. From his account, his parents finally broke through their parental denial and confronted him in 1986 on the day the Challenger shuttle exploded. “I was fucked-up and had no reaction to this gigantic, horrific disaster. That’s when they really saw what was going on.” With their help, Hinnebusch struggled through many relapses to eventually reach sobriety in 1989.

Since then, he has been dedicated to his painting. His work can be likened to that of "Jean-Michel Basquiat":http://en.wikipedia.org/wiki/Basquiat, if Basquiat had lived on the West Coast, been white and succeeded in kicking his heroin habit.

For a brief stint in the late ’90s, after attending the Santa Monica College of Design Art & Architecture for two years, Hinnebusch could be seen selling paintings on the Venice boardwalk, but skin cancer and peer annoyance drove him out of that arena, which was probably for the best. Enough people had already been exposed to his work, however, to generate a strong word-of-mouth following. When reviewing this year’s L.A. Weekly annual biennial, coagula.livejournal.com, wrote, “Even David Hinnebusch was there, so you know it was a scene.”

His projects are numerous, and his thought process scattered — evident in the way he’s built his Web site, fakeart.net, which has a haywire, John Forbes Nash–like layout and equally vexing navigation. But Hinnebusch has put tidbits of most of his endeavors online, in some form or another. He designs a line of clothing adorned with his illustrations, and is the proprietor of a custom surfboard company. He still sings (screams?) in Sunset Strip nightclubs with Entropy, the skater-hardcore punk band he formed in 1983, named after Jeremy Rifkin’s controversial 1980 book Entropy: A New World View.