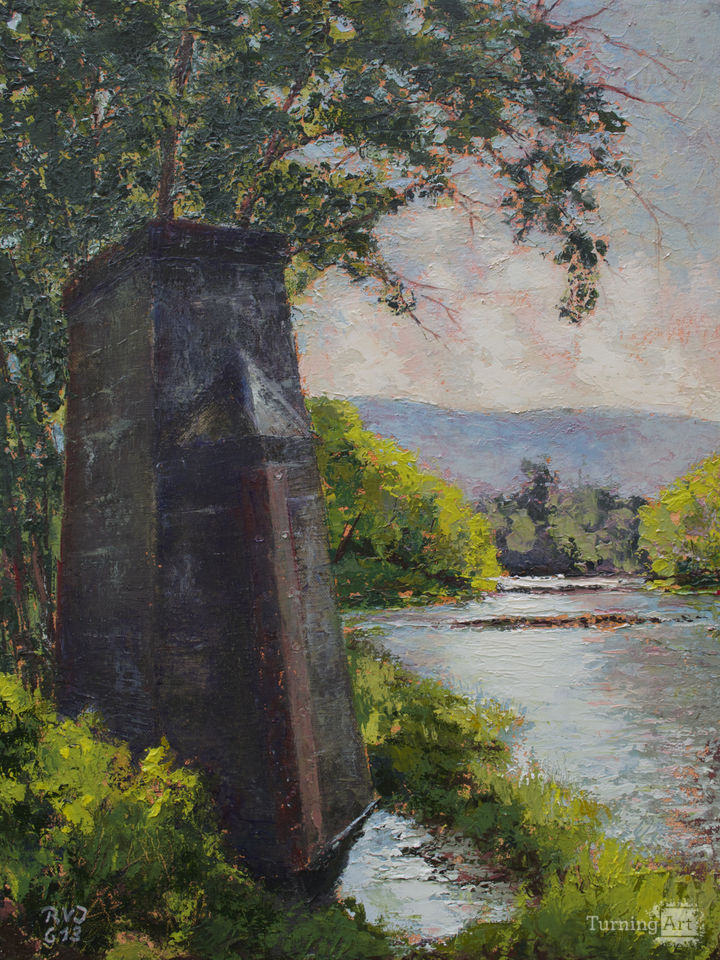 This painting includes an ancient railroad trestle abutment that sits in the West River. 36 Miles of Trouble was the nickname for the old West River Railroad. This railroad was incorporated in 1850 and ran up the West River Valley for 80 years. The line was built at the height of railroad fever in America.
Ten years after it was built the civil war was over and the western frontier was opened for settlement. This caused the depopulation of Vermont. In 1850 the population of Windham county was 29,062 and by 1930 it was 26,015. The hill farms disappeared and the forest returned. It was not a recipe for growth.

The railroad was always underfunded and accident prone, hence it's nickname. Derailment, rock slides, trestle collapses, and days stuck in blizzards between stations doomed it to failure. By the 1930s it was no more. All that is left are railroad beds and trestle abutments.

Here is a poem that I wrote about it:
Silent stone sentinel, some-time span,

Other works by Roger Vincent Jasaitis

I have a painter friend that, when he goes out painting, says “I’m going to steal some landscape”. An ironic take on the idea of making the image your own. Have you ever heard that in some cultures there is the belief that representations or photos actually steal the soul from the subject? Sounds pretty far out there? Somewhat crazy in this modern age? Have you ever wondered where this belief comes from?

The idea that a representation of something actually contains the Spirit or Soul (at least in some degree) of the subject is wide-spread. Even to the point that some religions will not allow images of God for fear that the congregation will worship the image and not the God. Other religions encourage depictions of the Spirit or God for precisely the opposite reason, to have the viewers feel a sense of Holiness. This is what an icon is. A representation of God that is transparent enough, metaphorically speaking, that the viewer feels a sense of the Spirit in it.

This is what I am feeling when I paint nature.