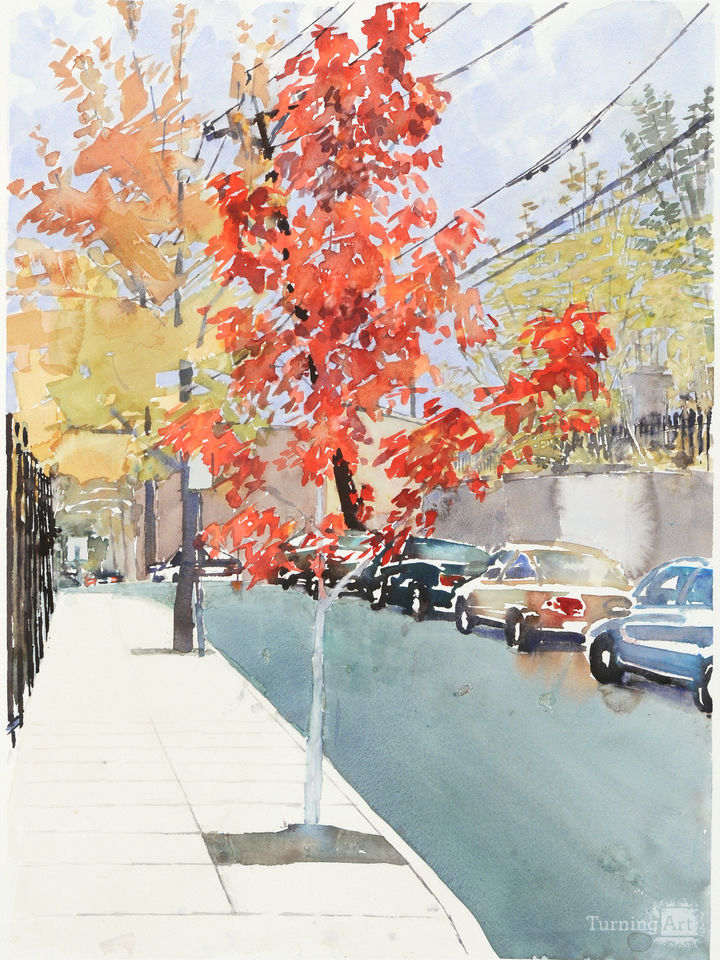 Painted outdoors on three consecutive afternoons in early November, 2008 in the Journal Square neighborhood of Jersey City, NJ. (formerly Old Bergen, the earliest Dutch settlement in these parts). This brilliantly foliated maple sapling stood out starkly against the backdrop of the Old Bergen Cemetery, Vroom Street, black locusts and bradford pears. City trees are a major theme in my watercolor portfolio.I limit the sessions to no more than one and one-half hours of steady light on bright days and up to two hours on overcast days. In this case, I needed to work quickly to avoid impending rain.

Other works by Steve Singer

Born in New York City in 1950, Mr. Singer grew up in New Jersey; graduated Millburn High School in 1968; attended Dartmouth College where he majored in fine art and graduated in 1973. After receiving a scholarship to study sculpture at Sir John Cass School of Art, City of London Polytechnic, he relocated to London where he first developed his studies in box-cardboard, and then translated these ideas into the more permanent medium of forged-and-welded steel. These were first shown at Nicola Jacobs Gallery, London in 1982.

In 1983 a grant from the Sir John and Lady Sainsbury Foundation enabled him to ship his sculpture to and eventually show it in New York City, where he has had numerous solo shows and outdoor installations. In 1984 he resettled in New York City, and established ateliers in Brooklyn from 1985-2001, when he returned to London to mentor his daughter through her foundation year at Camberwell School of Art. In 2001 he installed his stainless steel monument, LONGSHOREMAN, '01 on its commissioned site on the Jersey City waterfront during and just after the events of 9/11/01.

In 2002 he returned to the U.S. and re-established his atelier in Jersey City, NJ. He resides in Jersey City Heights with his current wife, Andrea Raphael. There he continues his commitment to drawing and painting from life along with his ongoing sculpture in steel.