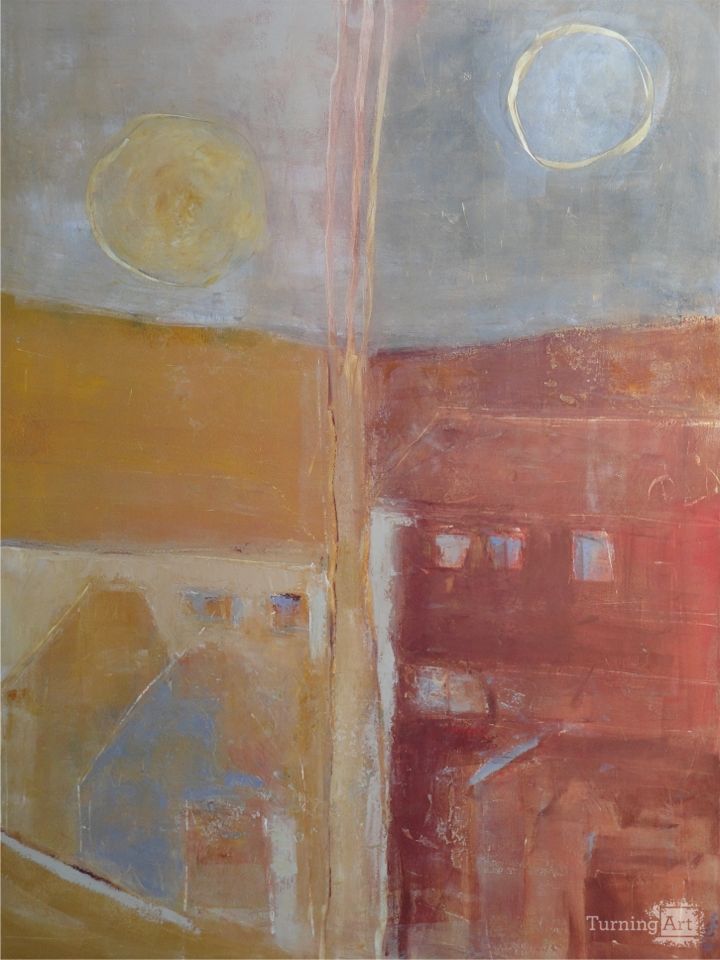 My artistic life has crossed a long arc. From a traditional, realist artist I evolved to what I call a representational abstract artist.

When I started painting, it took me years to free myself from academic restrictions. For years, I felt the need to demonstrate my drawing skills to others, then, that I could paint exactly what I saw. I now know that I was painting to the expectations of others, but I was not painting for myself. Discovering this was not an easy process, but I feel that it is with the experience that I gained during this period that I earned the right to paint for myself without having to prove anything; to focus only on placing into a painting all that is mine.

I was born, raised and educated in Italy; so besides my emotions, my time spent in the old country is at the root of much of my art. I find myself always striving to obtain an aged look to my work, and it is through a series of layers, scrapes, and markings that the paintings take a form of their own. For me, my painting is always a moment of self discovery, as if someone else were doing the painting and I am the first to marvel at the final product. In part for this reason, I paint primarily in oils, and generally prefer large format canvas, as it is in the large areas where I can truly lose myself.

View from Via Ofanto
This painting is a great example of how I often do not realize the meaning or substance of what I paint until I actually see what, subconsciously, I was trying to portray. This particular piece was painted upon my return from Italy. My parent's home has a great view of both the East and West, therefore every morning I could witness the sunrise and every night the sunset. Upon my return to the US I had a very emotional period of missing the vastness of the sky and the light, and this painting was my unintentional result. This is the reason I consider myself an emotional, representational abstract artist. My emotions are always at the root of all my work.

Nella Lush grew up in the Puglia region of southern Italy between the ubiquitous olive groves and the Adriatic Sea. Growing up in Italy meant being surrounded by art. Nella spent many hours as a young child drawing at her kitchen table with sister Franca while her mother critiqued their efforts and encouraged them to take on more ambitious work.

In her twenties, Nella moved to the Basque region of Spain near Bilbao on the Atlantic coast and later in the Catalonian city of Tarragona near Barcelona on the Spanish Mediterranean coast. While in Spain, Nella painted marine landscapes and vessel portraitures. She sold "portraits" to local yachtsmen in Bilbao and Tarragona, but the work was ultimately not fulfilling.

Years later Nella realized her frustration was the result of self-imposed rules and restrictions for her work. Too focused on painting her perceptions of what others expected, she ultimately came to the realization that like the drawings she did for her mother years ago, it was the freedom of unfettered self-expression that ultimately excited her. In this realization, her work became what she calls "representational abstract" – art without a purpose at it's core, but with suggestions of reality.

This freedom opened up a new world for her, and made hours at her easel seem like minutes. She could not paint enough, and had finally found her art. Nella's work is now part of private and corporate collections throughout the United States, Canada, Italy, France, Spain, Japan, Australia and New Zealand.

Nella is represented by: