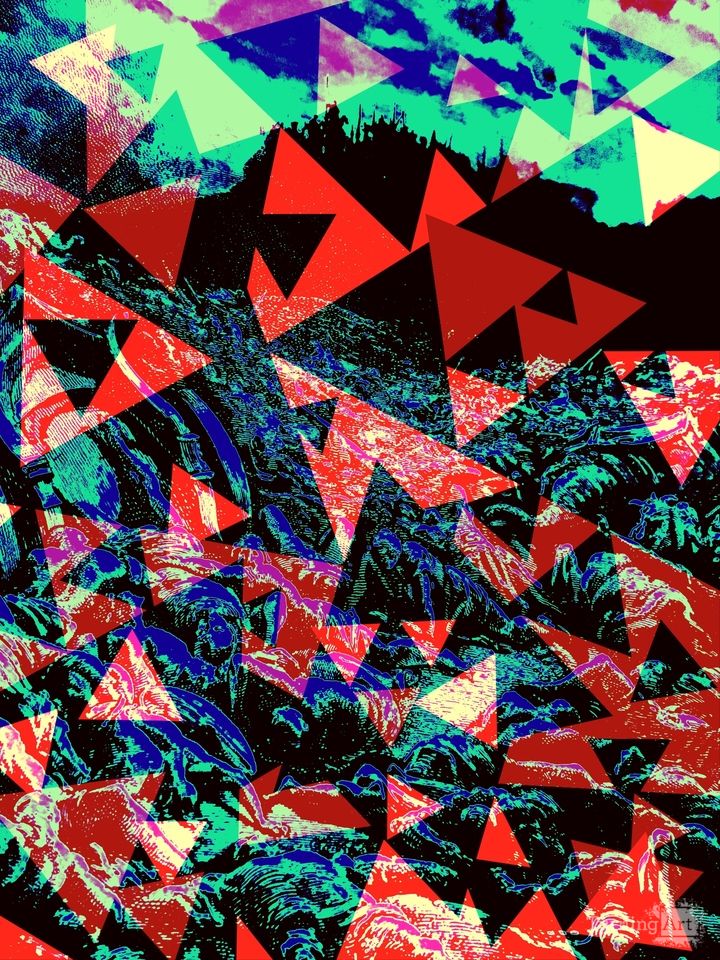 The base of this work is a manipulated photo I took of one of Gustave Dore’s beautiful and terrifying engravings of an Old Testament battle’s gruesome aftermath. It was from a copy of his Illustrated Bible which was one of my favorite sources of artistic inspiration. I have some misgivings about using parts of his actual work, but I feel it is justifiable considering how much I altered it, and that I give him credit as well. The lower part of the piece is composed of the slain victims of this large-scale carnage, and the red triangles are reflecting the bloody scenes below.

Other works by William Pattengill

William's parents were both trained commercial artists and with their encouragement he began drawing as soon as he could hold a pencil, and has not stopped making some sort of art since
then. Over time he has explored most of the tools and materials available to visual artists; when he got tired of the basic pencils and crayons, he moved on to colored pencil drawings in high school, then cut paper and photo collage in college, then a long romance with acrylic paint.

William found the ease and rapid working time possible with this medium to be very satisfying, but the rough texture of canvas bothered him so he began working exclusively on Mylar, a slick surfaced polyester resin that enabled every hair of the brushstroke to be seen. Another venture into alternative media was using thrift store encyclopedia volumes as a base for a wide range of materials: besides paint, he used sand, powdered chalk, gift wrap, thumbtacks, and plastic toy ants among other things.

As you can see from his CV below William is not a traditional art-school-to-gallery artist. Most definitely an "outsider" and proud of it. He has exhibited in offbeat art spaces, pop up galleries, educational institutions, etc. and is proud to have sold many of his painting and "books" in the process.

Having a large affordable painting studio in San Francisco for many years enabled him to paint on Mylar cut from a 48" roll and make a happy mess while at it. It should be no surprise to hear that such spaces became extinct in that city during one of the "dot-com gold rushes" and William, like many others, downsized instead of moving out of town to find the next-best cheap studios. From his home-based work space he began a period of smaller works on paper that also created less mess: water-based ink, felt pens and photocopy machines, sometimes all for the same project. After some time he focused entirely on working with the felt pens, beginning each drawing with no preconceptions or plan, to unleash pure spontaneity.

In 2019 William relocated to the city of Cork, Ireland, and while able to keep working with pen and paper, he changed course after seeing digital work by David Hockney that skillfully mimicked the look of watercolor. Like Hockney, he found the iPad to be an incredibly versatile and portable device, so
he could work practically anywhere and whenever feeling inspired.

As with most of his previous work, many of the recent digital drawings contain elements of both
chaos and order, structure and destruction, light and darkness. His long-standing interests in cosmology, alchemy, earth sciences, and mythology guide him in the choice of subject matter.
Some of these drawings are free-form, some use tools available through apps, and some are manipulations of his own photographs which open a door into the world of surrealism. He also found it intriguing to alter and rework some of his earlier felt pen drawings into his digital portfolio. Another unexpected pleasure was seeing some of his work published in the professional journal of an Irish society of psychotherapists.

Of his new medium, William says "I remember getting a fenced-in feeling after working with the same media over time, but with the iPad there are literally no limits to what can be created except the limits of my imagination."