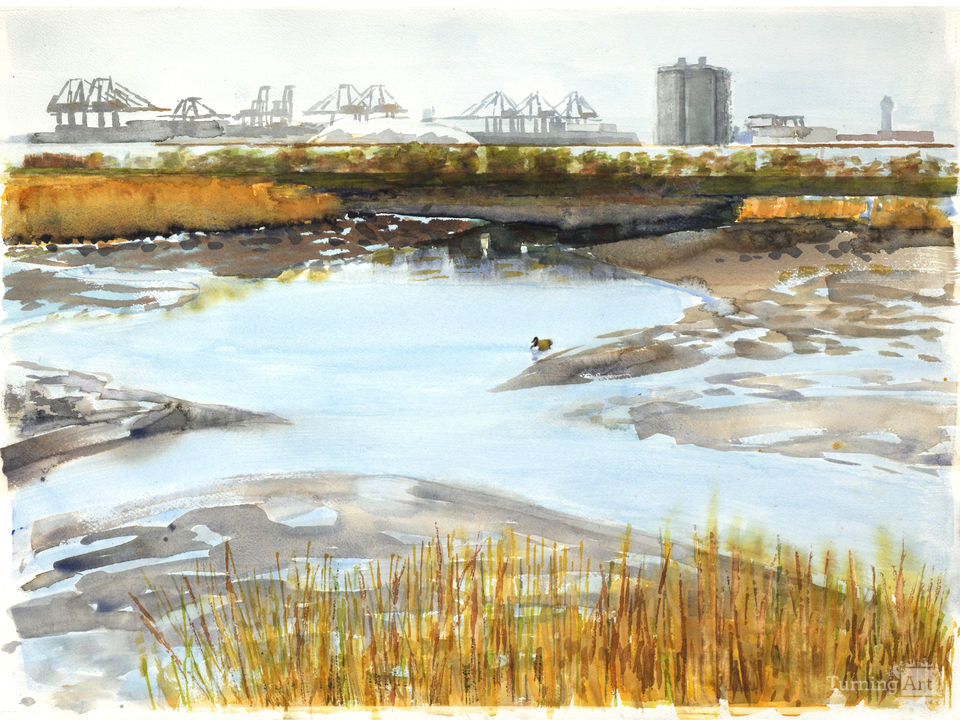 This was started in early December, 2012 on a bright-overcast day that was warm enough to paint. An unintentional empty spot in the wash of the waterway left room for a waterbird. I returned to the site in January to paint in the canada goose. Rutkowski Park, Bayonne, NJ, overlooks Newark Bay, Port Elizabeth, and Newark Liberty Airport.

Other works by Steve Singer

Born in New York City in 1950, Mr. Singer grew up in New Jersey; graduated Millburn High School in 1968; attended Dartmouth College where he majored in fine art and graduated in 1973. After receiving a scholarship to study sculpture at Sir John Cass School of Art, City of London Polytechnic, he relocated to London where he first developed his studies in box-cardboard, and then translated these ideas into the more permanent medium of forged-and-welded steel. These were first shown at Nicola Jacobs Gallery, London in 1982.

In 1983 a grant from the Sir John and Lady Sainsbury Foundation enabled him to ship his sculpture to and eventually show it in New York City, where he has had numerous solo shows and outdoor installations. In 1984 he resettled in New York City, and established ateliers in Brooklyn from 1985-2001, when he returned to London to mentor his daughter through her foundation year at Camberwell School of Art. In 2001 he installed his stainless steel monument, LONGSHOREMAN, '01 on its commissioned site on the Jersey City waterfront during and just after the events of 9/11/01.

In 2002 he returned to the U.S. and re-established his atelier in Jersey City, NJ. He resides in Jersey City Heights with his current wife, Andrea Raphael. There he continues his commitment to drawing and painting from life along with his ongoing sculpture in steel.