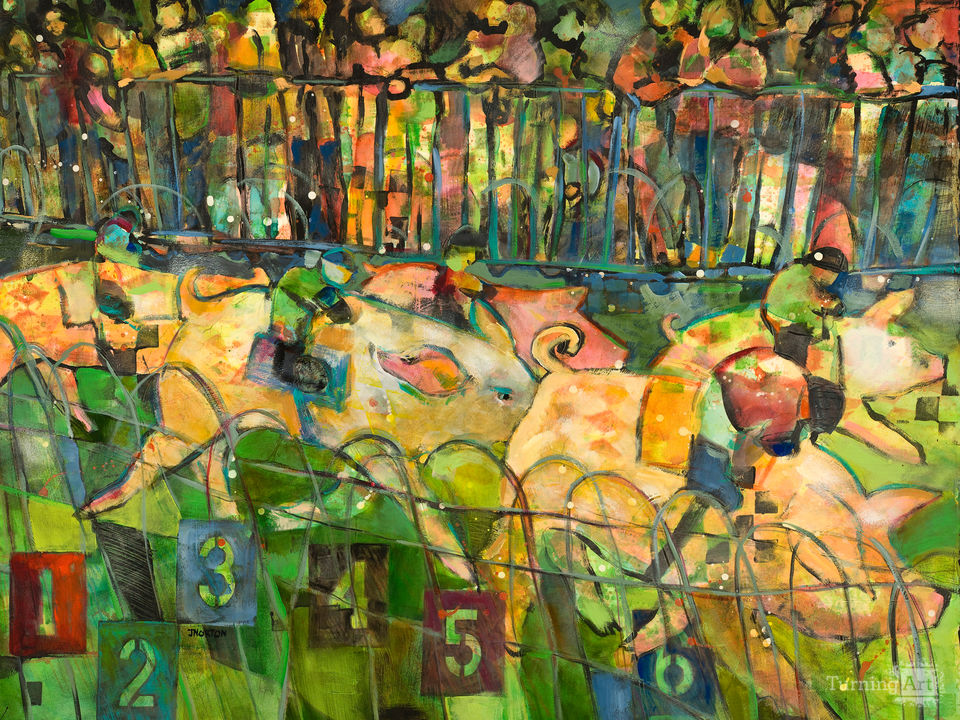 On a trip to Ireland our adventures took us to Belturbet to watch Pig Racing. Not even all the locals know about this high point of culture. In fact, we arrived early unable to find where the races were to be held. At 3:30pm, there was not a sign, crowd, or hint of the impending excitement. But at 4pm, the atmosphere changed. Two trucks pulled up…one filled with pigs, which proceeded to unfold, revealing the starting line; the other transformed into the finish line. Barriers were put up, a green Astroturf® carpet was rolled out, short little pig hurdles were spaced along the route, and the bets were taken. By 4:45pm, the races began, with six contending pigs racing down the line with stuffed "jockeys" strapped to their backs.! "Watch out for #6…She's a real flyer!!" yelled the announcer. Sure enough, five seconds later, #6 was declared winner, the pigs were rewarded with a snack and herded back to the starting truck for the second round. Six rounds of betting, six races…I lost them all, but ended up with an inspirational subject for new paintings!

This piece won the 2009 First Place Award at the SCVWS Annual Exhibition. Judge Christopher Schink commented, "It's hard to do a good painting that amuses you. This painting is fun without being corny. With its broken-up design, this piece conveys the feeling of the subjects without seeing them. It delighted me! Not just an illustration, it is full of fun and whimsy and has an imaginative concept of design."

Other works by Jen Norton

Jen Norton is a native Californian who spent her teen years in Arizona. Jen returned to the Bay Area for college, graduating in 1987 from Santa Clara University where she earned a Bachelors degree in Fine Art, with a Minor in Business.

Painfully shy as a child, Jen was unable to communicate with anyone outside her family except through drawing. Visual language was her first language and she never lost her passion for its ability to communicate for her. There was never a day she "decided" to become an artist. For Jen, there was just no other way to be.

After graduating from college, Jen worked as a Graphic Designer for CKS Partners in Cupertino. Developing marketing communications materials helped push her from purely personal expression to full conversation. After a ten years as a graphic designer, Jen left to pursue painting and raise her daughter. Meaningful relationships and everyday moments of family and home are her subject matter, revealing the Jesuit principles of finding God in the everyday and mundane that were instilled in her education.

Jen works in acrylic, using expressive color, texture and pattern to reveal the sublime in the ordinary. She begins each painting with underlying layers of intense hues and expressive brushwork, which gradually become hidden from view as the painting progresses. These underlying layers are important to the depth of the final work, just as years of spiritual growth are to a well-rounded soul. Jen seeks to develop order and beauty from chaos. Jen believes that through art, one can hear the whisper of a mighty Creator. Her intention is that her art may cause you to pause and listen.