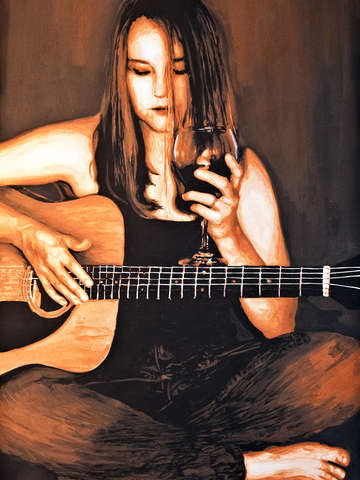 This is my best friend Salli Scott. I had less than a week to paint her; she came ‘knocking’ in her usual procrastinating style. Those long nights spent working on this painting don’t matter when we are talking best friends.

Sal and I have been best friends since freshmen in college. We both played on the school’s tennis team, and shared other common interests, which I rather not discuss here. She is well liked and mostly remembered by many as the girl who could play a guitar. There are so many pictures from our college years with her looking as she does here.

So when she told me jokingly that she wanted to be ‘immortalized’, I was immediately thinking …. ‘with a guitar’. I took her pic in my house and with my husband who is also her band member (you’ve heard of them, they are called 13.1) on his way home we had to do the photo shoot fast. I had to respect the fact that some people as myself don’t want an audience when pictures are taken.

I named this Concerto of Deliverance, the title and also partly inspiration for my work comes American novel, Atlas Shrugged, by Ayn Rand. Concerto of Deliverance is a musical composition created by a fictional character Richard Halley. It speaks of troubles before reaching the light; it is a symphony of triumph.