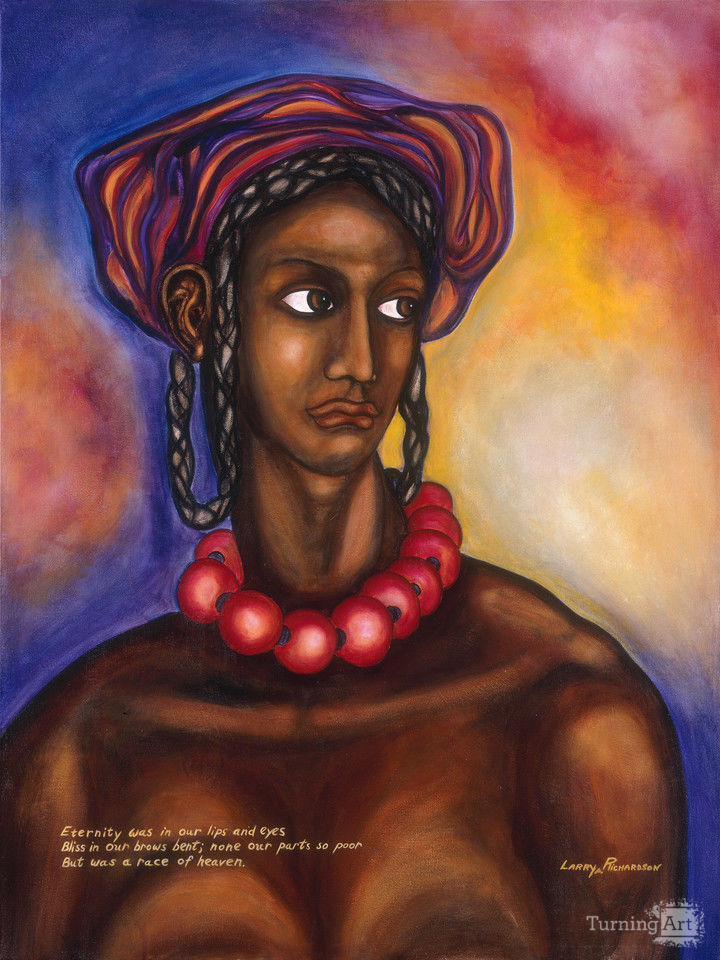 This paint was inspired by a drawing of Michelangelo. Their has always been some discussion and wonder of the image of Cleopatra. This is my version as an artist. In the lower left corner of the painting is a verse from Shakespears Cleopatra.it states.

Eternity was in our lips and eyes.
Bliss in our brows bent; none our parts so poor.
But was a race of heaven.

These lines are spoken by Cleopatra in Shakespears play I feel the painting states this.

Other works by Larry Richardson

With an art background that dates back to his days at Oakland High School, Larry Richardson's history is as colorful and varied as his paintings. Richardson was awarded a full scholarship to the California College of Arts and Crafts, but was unable to attend as he needed to work to support his family. As a result, Larry joined the Navy shortly after high school graduation.

After returning from service in the far east, he was granted a partial scholarship to the California College of Arts and Crafts. Shortly thereafter, Larry left his studies to become part of the civil rights movement. After traveling through the south and concluding his work in the movement with the "March on Washington":http://en.wikipedia.org/wiki/March_on_Washington_for_Jobs_and_Freedom, Richardson had the honor of being present during the historical "I Have a Dream":http://en.wikipedia.org/wiki/I_Have_a_Dream speech, by Dr. Martin Luther King. Upon his return to California he continued to paint and entered many juried exhibitions.

In the late 1970s Larry assumed the position of deputy director for "Brockman Gallery Productions":http://alternativeprojections.com/data/organizationDetail.php?org=Brockman%20Gallery%20Productions, an arts resource center, and was instrumental in obtaining grants for the 1984 "Los Angeles Olympics Murals":http://en.wikipedia.org/wiki/Los_Four#Exhibitions_and_murals project. After a successful tenure as arts administrator, he returned to painting full-time.