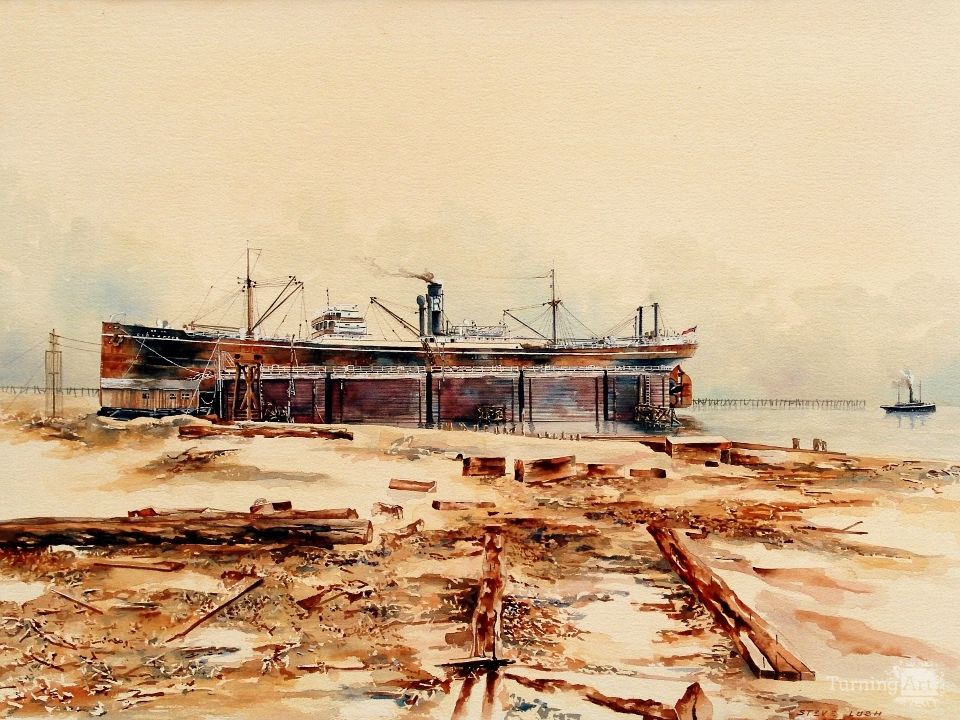 The "Blythmoor", a 6582 GT cargo vessel launched in 1922 by the Wm. Doxford / Pallion Shipyard at Newcastle-upon-Tyne, was initially under control of the Moor Line Ltd. She was eventually turned over to and managed by the W. Runciman & Co. shipping firm.

In late March of 1940, "Blythmoor" departed the UK for Norway. On April 10 she and 13 other merchantmen from Europe were trapped in the port of Narvik when the German destroyer, "Roeder" approached and opened fire. The British escort vessels, "Hotspur" and "Hostile" returned fire while the merchantmen tried to flee the fjiord, running for their lives! "Blythmoor" was not so lucky being hit by an errant British torpedo. She went to the bottom along with six of her crew.

"Blythmoor" is depicted here years earlier and during less turbulent times upon a marine railway in the US. The "Chief" has ordered steam up in the boilers while a tug waits patiently for her launching back into active service.

Other works by Steve Lush

Steve was born in 1949 into a family with roots in both art and the sea. In 1968, after a year working as a "machinist apprentice" in an East Boston shipyard, Steve attended the Massachusetts Maritime Academy. Graduating in 1971 with a Merchant Marine Engineer's license Steve sailed five years aboard freighters with American Export Lines and oil tankers with Standard Oil Co. of California. These voyages took him to ports around the Mediterranean, India, Africa, the American west coast and the South Pacific. Steve made three voyages from Brooklyn, NY to India via the Cape of Good Hope when, in the 1970's, the Suez Canal was closed to transit shipping.

Steve began building model ships in 1978 while living in Spain renewing his love of ships and the sea. Since then he has won 3 gold medals in model ship competitions in the Boston area and in Spain. In 1992 he began painting in watercolor and other mediums.

Many of the maritime themed watercolors are a result of research on specific ship and port histories and ship construction. Steve uses a collection of reference books, ship construction plans, personal reference photos and his own models to orchestrate his paintings. Once the subject is drafted, Steve applies washes in a painterly yet strategic and detail oriented approach. Every August, Steve and his wife, Nella, also an artist with TurningArt, travel to southern Italy to visit Nella's relatives. Steve finds time to paint plein air in Italy, a welcome change from his normal studio based work.