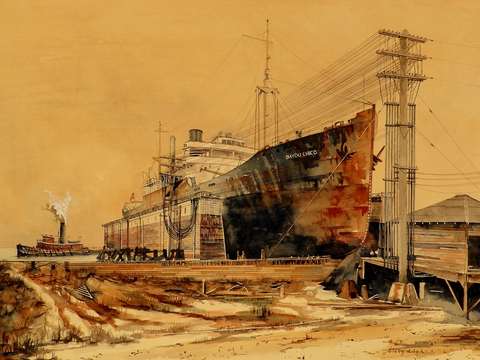 The "Bayou Chico", a freighter built by the Pensacola Shipbuilding Co. of Florida, was built under direction of the US Shipping Board and launched into service in October of 1920.

In March of 1942 she was part of the transatlantic convoy ONS-18. Convoy ONS-18 joined up with convoy ON-202 heading west towards England via the Arctic Circle; they were attacked by German U-Boats and the Luftwaffe. "Chico" was bombed by the Luftwaffe just west of England early in the voyage but sustained minor damage during the attack. She was ultimately scrapped in 1946.

"Bayou Chico" is depicted here hauled out on a marine railway ready for launch back into service. Yard workers are clearing the platform while a tug gives a blast of her whistle to let everybody know she is prepared to ease "Chico" out of the railway once afloat and bring her alongside an adjacent dock.