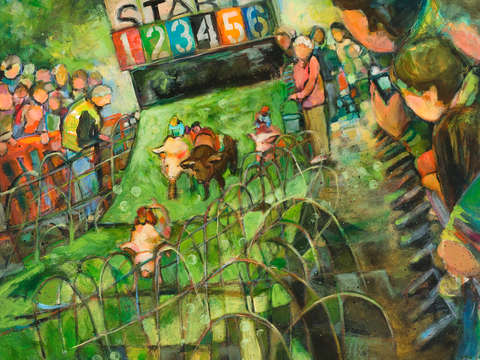 On a recent trip to Ireland our adventures took us to Belturbet to watch Pig Racing. Not even all the locals know about this high point of culture. In fact, we arrived early unable to find where the races were to be held. At 3:30pm, there was not a sign, crowd, or hint of the impending excitement. But at 4pm, the atmosphere changed. Two trucks pulled up…one filled with pigs, which proceeded to unfold, revealing the starting line; the other transformed into the finish line. Barriers were put up, a green Astroturf® carpet was rolled out, short little pig hurdles were spaced along the route, and the bets were taken. By 4:45pm, the races began, with six contending pigs racing down the line with stuffed "jockeys" strapped to their backs.! "Watch out for #6…She's a real flyer!!" yelled the announcer. Sure enough, five seconds later, #6 was declared winner, the pigs were rewarded with a snack and herded back to the starting truck for the second round. Six rounds of betting, six races…I lost them all, but ended up with an inspirational subject for new paintings.